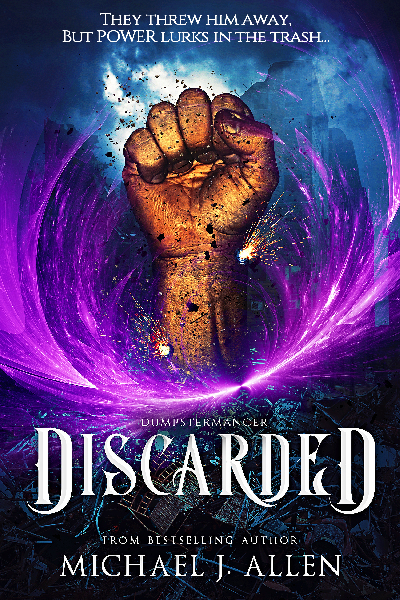 ​​Magic has been franchised. Magical conveniences are sold everywhere like designer coffee. Everyday life is filled with technical and magical wonders. Only, the magic is murdering people.

Thoth Corp's hot new spell is turning people into ravening monsters. Their only hope to quietly rectify the situation before the epidemic spreads is the spell architect they framed and sent to prison.

Homeless, forbidden government-regulated magic and barely surviving out of dumpsters, Eli struggles to rebuild his life. Fairytale rats thought long extinct with the rest of the fey rescue Eli from murderous vigilantes but at a cost. They force him to save fairy matrons stolen away by Thoth's monsters, thrusting Eli between his old company and a shadow war waged against humanity.

To stop the war, cure Thoth's victims and rescue the city, Eli need only find some way to make magic out of trash.

I received "Discarded" by Michael J. Allen to review on my blog!

The main character (Eli) is framed for a crime he didn't commit. He is restricted from the one thing he loves,which is using magic. He is homeless and trying his best to survive. He is practically living out of a dumpster! He is trying his best to rebuild his life. He goes through much troubles in his journey.

This is a very well-written fantasy book with incredible dialogue between characters.

I highly recommend this book!

If you are interested in purchasing  this book,check out the link below: