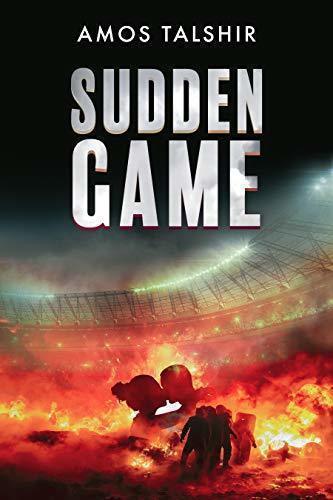 A common sport event turns into a brutal war of survival


A naked woman takes one hundred thousand fans by surprise when she storms the playing field. The writing on her buttocks reads: Free World. Contrary to expectations, the stewards do nothing to stop her. As she stands alone frozen in the middle of field, the only person to come to her rescue is a young man named Simon.


The stunned fans scrambling to exit the stadium discover its gates have been shut and snipers positioned on the roof are shooting at anyone who tries to disrupt order, forcing the fans to remain inside the stadium against their will.


All 100,000 fans realize life as they knew it would never be the same again and that they must conform to the new order—to eat, love, have children, and live differently.


The lack of basic conditions only made living in the largest cage in the world worse with every passing day, leading to a fight for survival that does not leave anyone unscathed…

I was sent the book Sudden Death by Amos Talshir to review on my blog.

A naked woman runs on to the field with the words "Free World" on her behind. Everyone runs away and scatters. The fans realizes the exits are blocked and the stadium is heavily guarded by snipers.The main character, Simon approaches the woman. And then everyone comes to the realization that this is the New World Order and they will have to spend the rest of their lives in that stadium.

This was a very intriguing book. It reminded me of a short story called Wayward Pines that was written by Rod Sterling, which was about people that were stuck in a town and had to eat,sleep and procreate there for the rest of their lives.

I always enjoy books where people are normally confined to a certain place because it usually shows how certain people behave in a desperate situation. Some people's whole persona changes, when they are in a terrible situation. And your human/animal instinct kicks in when you have to survive and try to escape this horrific situation.

I highly recommend this book. It is definitely worth a read.

If you are interested in this book, you can purchase it on Amazon at the link below: