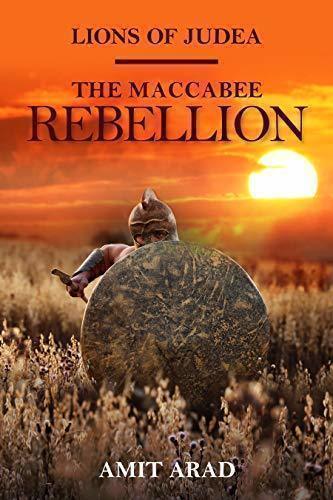 No one believed they could survive, but they refused to forsake their faith.

Judah Maccabee is no longer a youth, but a great warrior and the unchallenged leader of the Jewish People.

He leads his people to victory after victory on the fields of battle and diplomacy, shocking the leaders of the mighty Seleucid Empire.

Relentlessly, the armies of the empire are sent to crush the rebellion in Judea. They will do anything to eliminate the Maccabee army and suppress the Jewish faith.

But although the Maccabees are massively outnumbered, they have no choice but to overcome their foes. They know that their defeat would be the end of the Jewish People.

This is the incredible story of the Maccabees, who transformed a nation of rustic farmers and priests into a steel hard army which won eternal renown.

I've been reading a lot of books in the last 5 months,so I'll be doing tons of book reviews on my blog.

I received the book,"Lions of Judea: The Maccabee Rebellion" by Amit Arad to review on my blog.

This book was definitely a fascinating read. It is the second book in the series. It is a historical fiction book by a very talented writer named Amit Arad. I was very impressed with his writing style. He uses the right words to captivate his audience.


Most people are unfamiliar with the Maccabees. They were known as a gang of warriors that gained control of Judea,which is part of the Seleucid Empire.

They created the Hasmonean dynasty. The Jewish religion conversion was slightly forced,which caused expansion outside of Judea.

The Maccabees were massively outnumbered and knew that if they were defeated it would be the end of the Jewish people.


I greatly enjoy reading this book.

I highly recommend this book!


If you are interested in this book,check out the link below: